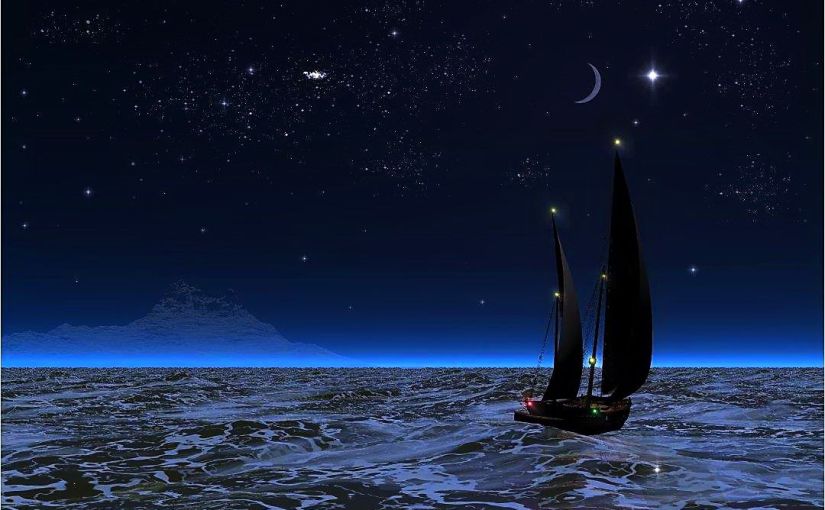 On my former blog, The View from 5022, I wrote about making necessary adjustments to one’s life and efforts by using the analogy of sailing.  The post is titled “Coming About.”  A few nights ago, I performed the equivalent of pumping out the bilge, trimming the sails, and charting a new course.

To continue with that analogy, since the end of last year, I have experienced stalls, squalls, and I’ve run aground a few times.  But more recently, there have been breaks in the clouds and a freshening breeze.  When I crawled into bed Monday night, I knew there was much to be thankful for but, because of all of it, I felt a bit battered.  I grabbed a pen and the closest thing to write on, a prayer and praise journal (which was fitting), and made an assessment of the gains and the losses.

I had been struggling for months with a particular Canadian-born bank which had mismanaged my account and reversed a payment to the IRS, costing me hundreds of dollars in penalties, fees, and increases in interest.  The government consumer protection agency and the senator’s office helping me with the issue informed me Monday that the issue is being dropped.  To stay upset would only hurt me.  I tossed the issue over-board.

Inspired by the marches on Saturday, I enthusiastically volunteered my services to the senator’s office and was told someone might be in touch…at some point…maybe.  Issue tossed.

Since just after Christmas, I have written (actual letters on actual note cards in actual cursive handwriting) to 9 friends and family members.  None of them have responded.  Looking for addresses of others to write to, I came across an old phone list.  On it was the name of a former doctor who, earlier last year, had been enduring cancer treatments and surgery, a long time friend who, earlier last year, had been reeling from the emotional blow of retirement, and a former coworker, from 2001 time-frame, who was likely concerned about the future of her career with a governmental climate science agency.  I made the calls and was met with instant re-connection, filling my emotional sails with billowed hopes.

Last Summer, when preoccupied with my sister’s arrival from Alaska, I stopped attending the small Episcopal church on the other side of town.  Driving by there late last month, I saw on their marquee a notice about an oyster roast.  On Saturday, I noticed the date had been changed to this weekend.  I called.  I volunteered to help.  However, I was informed that the priest I had known there had died, suddenly, in December.  (I wrote about several of his homilies last year.  See “To the Extent that One is Forgiven, One is Capable of Loving” and “What I Didn’t Know.”)  He was one of the few people who has believed my inner experience of God.  (Father B: “You help me because you are able to hear what it is I am trying to say.”)  Recalling that he was now gone from earth, my enthusiasm was suddenly becalmed; I felt more alone on earth than I had before.

My faith and beliefs have come under attack, recently, by bloggers from opposite ends of the religious spectrum.  On the one hand, there are the bloggers who hold that all people should believe xyz, strictly and immediately.  (I respond that each person should be allowed and encouraged to be where they are on their spiritual path to God; at least they are on the path and God is not done with them yet.)  On the other, there are those who hold a larger view but accuse me of insisting that mine is the only way.  (I am out of words with that one; My way is MY WAY and I offer it as an example…nothing more.)

At the same time, ironically, I have discovered that there is a spiritual path…a Christian path…with followers who hold the same beliefs I do.  Although I have come to my beliefs, faith, and inner life the hard way, having found them, I sought to join them.  It seems, however, that although they acknowledge my interest, I have been excluded apparently because I lack the expected background and education.  So, I will continue on my own, navigating by the heavens and sailing ‘solo.’

The course I am left with is a simpler one, lacking an itinerary with specified destinations. It is more a way of sailing:  trusting in the guiding stars (Jesus and the communion of saints) and the breeze on my face.   Watching the tell tail, testing the wind, keeping an eye on the horizon (and the channel markers),…this is the stuff of life.

(I borrowed the image above from the web)

Laying down my life View all posts by Kitsy Stratton